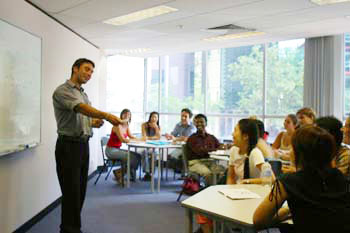 Huge for Australian conditions (only 20 million inhabitants across the continent) mass of immigrants means, that the education system also had to adapt to this phenomenon.

There are specialized schools for immigrant children in Australia, in which special emphasis is placed on learning English.

There are both primary schools, as well as average. These schools are called Intensive English – in addition to all the subjects that a student would need to know at a given stage of education, the school puts additional emphasis on the English language. Such a school provides for a year of study.

In addition to primary and secondary education, Australia has a huge number of all types of schools and language courses – at different skill levels and at different prices.

Choosing the right way, to raise your level of English proficiency, it should not pose any difficulties.

Polish students who decide to learn English in Australia most often sign up for language courses lasting from 12 do 24 weeks. The choice of the length of the courses depends mainly on the level of language proficiency, and also from the goal of learning – both general language learning is possible, as well as specialized subjects, e.g.. Business English.

Language schools are usually taught during the day, however, there are exceptions and some schools have evening classes.