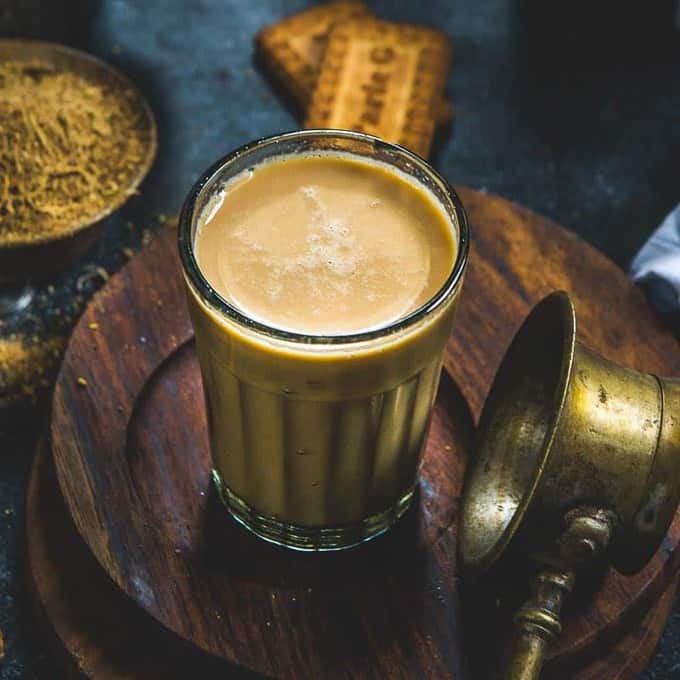 Recently, I described one of the traditional Indian drinks - Bhang lassi. And somehow I'm in the mood, to describe another tradition. And it will be a drink again!
This time, less controversial than Bhang lassi and rooted even much deeper in the culture of this extraordinary country.

Indie kultura - Masala tea.
Masala chai is black tea with milk, seasoned with herbs and Indian spices. It is served in every imaginable corner of India in a tiny cup, usually metal. Its taste is unique and I suppose, that it cannot be experienced outside of India.
The history of masala chai comes from ancient Indian medicine - Ayurveda. For a long time, tea was treated only as a medicinal drink.
Only at the beginning of the 20th century, thanks to the British and their tea promotion campaign, India began drinking tea en masse. Since then, you can say, that they were crazy about tea. People started drinking black tea with hectoliters.

But hey! How exactly was masala chai created?
There are many theories and no one can decide, which one is true.
First story, which I personally like best, talks about an enterprising man, who really wanted to increase the sale of milk. He had a brilliant idea, that if tea sells so well, why not mix it with milk?
Through trial and error, he tried to find the best ratio between milk and tea. Still, he was missing something. So he decided to throw in sugar - better! And finally, a little more spice and puff! This is how masala chai was created!
The second story presents quite the opposite. She says, that at the beginning of the 19th century, tea in India was one of the most expensive products.
So the Indian tea association started promoting tea consumption, advertise to increase income. Because black tea was the most expensive ingredient, sellers used milk, sugar and spices, to keep great taste while keeping costs as low as possible.

Masala chai became incredibly popular only in the 1960s. All thanks to the mechanization of tea production. The special CTC system has caused, that tea has become much cheaper and available to most of the Indian population.

Masala chai is served at every corner of every street by the so-called chai chai. Chai Angiel is basically like a barista, specializing only in the preparation of chai.

The process of preparing masala chai is an art.
It begins with the preparation of the stock by actively boiling the milk mixture, water, loose tea leaves, sweeteners and whole spices.
The process varies by region.
Some people combine all the ingredients at the beginning, bring the mixture to a boil and strain out the solid ingredients immediately after boiling, leaving only the decoction.
Others leave the mixture to simmer for a long time or start by boiling only the tea leaves.

Chai is always served to visitors to the homestead. It is a sign of respect and the host's wife prepares this noble drink with great care.
Estimated, that in most areas of India, one inhabitant drinks on average 4 chaiu cups for the day.
I dare to say, that's bullshit.
Wherever I have had the opportunity to be chai is even adored. It is drunk practically all day. For breakfast, after breakfast, at noon, in the afternoon, before dinner, after dinner.
I even met one Indian, chaiu seller, which he announced to me, that he only drinks chai. Nothing else. All day long.
In fact, you could see it because he was running around like he was filmed with a thermos full of chaiu trying to sell the cup to anyone who entered the monkey temple. One cup for you and one cup for me! And so he toasting all day.
I wonder if he earned anything at all or if he drank everything himself ...
The first time I tried masala chai I liked it so much, that I decided to drink chai everywhere, wherever I am staying. It took a while!
I drank my best chai in the most seedy roadside pubs, where dirt on the floor created a tarry and impermeable layer of sebum and the cleanliness of employees' hands left much to be desired.
But I guess that's what her charm is!