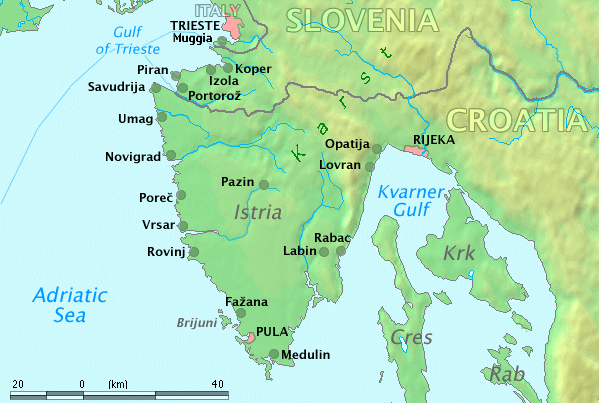 Istria is a heart-shaped peninsula, about the area 3600 km2, located south of Trieste in Italy. It owes its name to the Illyrians who live there, who were conquered by the Romans v 177 r. p.n.e.

History of Istria in the 20th century. it was very turbulent. Italy received the peninsula from Austria-Hungary in 1919 r., a w 1947 r. it fell to Yugoslavia. A large Italian community lives in Istria. There is even an Italian newspaper in Rijeka, The Voice of the People. Marshal Tito wanted, that Trieste would become part of Yugoslavia, but in 1954 r. the Anglo-American occupiers returned the city to Italy, so that it does not fall into the hands of the communists. Currently, the section of Koper-Piran belongs to Slovenia, and the rest of the peninsula to Croatia.

Istrian Riviera, about the length 430 km, famous for its wonderful Mediterranean landscapes and climate. Long summer, running from May to October, attracts crowds. On the northern coast of Istria, around Koper and Izola, industry and ports are concentrated. Located in the northwest corner of the peninsula, the resort town of Umag is uninteresting and spread over a large area. Novigrad is much more pleasant and historically interesting. W XIV w. Elizabeth was sent here (widow of Louis I, from 1370 r. king of Poland) together with his daughter Maria, widow of Sigismund of Luxembourg. The farther south, the cleaner the water is, less tourists, cars and industry. A must stop in Piran and Rovinj, which are the perfect base for exploring Porec and Pula.

From the main cities of Istria, Koper and Rijeka, buses to almost all places on the peninsula leave every few hours. Because there aren't many trains there, best to travel by bus.

Ferries – From April to September, the fast Marconi ferries of the Italian company Adriatica Navigatione operate between Trieste and Istria, starting from Trieste 6 times a week Fr. 8.00, they return from Istria in the afternoon. Marconi ships always call at Rovinj (3 at, 19 $), while to Porec (17$) only on Mon.. and Wed. from July to September. Ships also stop on the Brioni Islands (24 $) and in the port of Mali Losinj (42 $), only on weekends from July to September. In some ports an exit and entry fee is charged 3 $. In Trieste, tickets can be purchased at Agemar (tel.40/363737) przy Piazza Duca degli Abruzzi 1 a.

The ship Marina of the Lośinjska Plovidba company runs on the Venice-Zadar route. Tourist agencies in Istria, such as Kvarner Express, they should know his departure times, but you may have to buy tickets on board. Marconi and Marina depart from the locations marked on the maps in this book as' Clearance”. Sometimes there are timetables there. Traveling by boat is incomparably more attractive than, for example, by bus.

Poreć, the former Roman city of Parentium, is lying on the low, narrow peninsula, roughly in the middle of the west coast of Istria. It is one of the oldest cities on the peninsula. Ancient Dekumanus, lined with polished stones, still serves as the main street of the city. Even after the fall of Rome, Porec remained an important center of Christianity: Bishop Euphrasius built a magnificent basilica here, which is one of the most valuable monuments of Byzantine art in Europe. Porec is currently the largest resort in Istria. In the old part of the city, the urban layout from the Roman times and many Romanesque and Gothic monuments have been preserved. Traces of bygone eras, visible at almost every step, make this city extremely attractive for tourists. Along the rocky shore, at the north end of the old town, you can find many excellent places to swim in the sea.

Tourist information office (tel.451293) is located on Zagrebaćka Street 11, and the Atlas travel agency, representative of American Express – on Euphrasius 63.

Auto-Club Porec (tel.431503) is located in a large, white building, next to the Citroen service north of the market.

The old town is full of monuments. The ruins of two Roman temples are located between Trg Marafor and the western tip of the peninsula. In the 4-story Regional Museum (codz. throughout the year), which is located in the old one, baroque palace at Dekumanus 9, you can see archaeological and historical exhibitions (descriptions in German and Italian).

The main attraction of the city is the Euphrasian Basilica from the 6th century., where you can admire the beautifully preserved golden Byzantine mosaics. Also capitals, the sculptures and architecture are wonderful testimonies of Poreć's former glory. Admission to the church is free, and for a small fee you can visit the adjoining early Christian basilica, with a floor decorated with mosaics from the 4th century.

From May to mid. X, co 30 min around the clock, passenger ships are sailing (2 $ round-trip) do Sveti Mikola, a small island located in front of the marina in Porec. Ships depart from the small boat dock in front of Hotel Poreć.