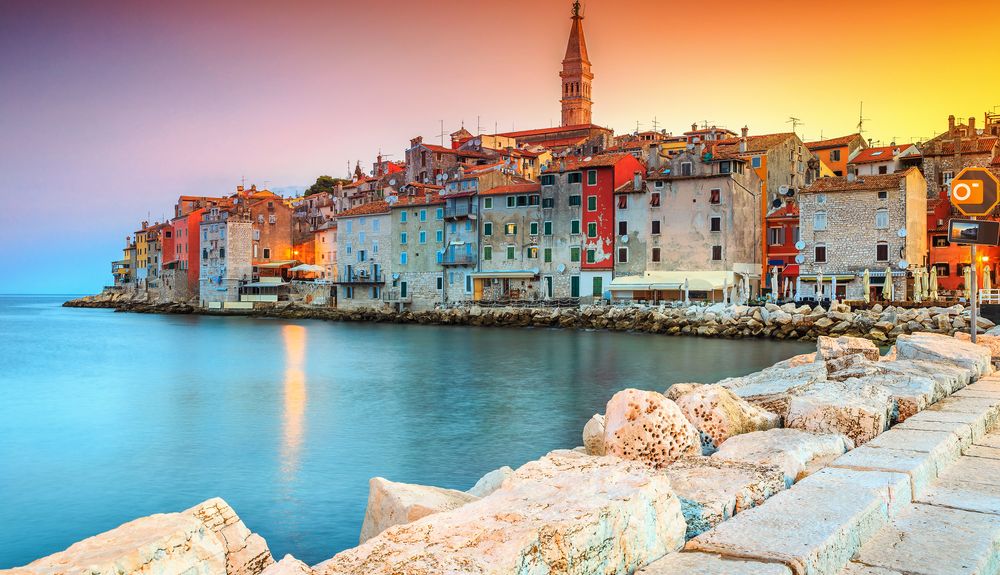 A quiet town Rovinj, located on the western shore of Istria, is probably one of the most interesting towns on the peninsula. Above the city rises the 57-meter-high tower of the huge St.. Euphemisms. The city is surrounded by hills covered with forests, on which the low ones were built, luxury hotels, a 13 coastal, The green islands of the Rovinj Archipelago add to the charm of the varied landscape. Cobbled, the steep streets of the old town are picturesque. Rovinj is still a fishing port, so you can see the inhabitants on a daily basis at work. A large Italian community lives in Rovinj.

This charming city is the perfect stopover for a trip to the islands south of here.

In the event of a breakdown, motorized tourists can turn to Auto Moto Druśtva (RIGHT), next to the large parking lot at Obala Palih Boraca.

You can make phone calls from the post office behind the bus station; area code for Rovinj:052.

An object that deserves special attention in Rovinj is St.. Euphemisms with 1736 r., which dominates the city not only because of its size, but also the location at the top of the hill. This largest baroque building in Istria dates back to the 18th century., when Rovinj was the main city in Istria, an important fishing center and port of the Venetian fleet. In the middle of the cathedral, behind the altar on the right, there is a tomb of St.. Euphemisms, who was martyred in 304 r. The saint's remains were brought here from Constantinople in 800 r. Every year, on the anniversary of his death (16 IX), church ceremonies are held. The copper statue of St.. Euphemia is crowned with the top of the mighty tower of the cathedral.

It is worth taking a walk along the winding ones, narrow streets below the cathedral. On one of them, Grisia street, local artists are selling their works. Rovinj has become an important art center, and every year in mid-August, painters from Rovinj exhibit their paintings during a great artistic event held in the open air.

However, it is much more interesting aquarium (founded in 1891 r.), at Obala Giordano Paliaga 5 (codz., 1,50 $, closed. half of X-IV). There are interesting marine animals that live in the coastal waters: from poisonous fish, similar to a scorpion, to colorful anemones.

After exploring the city, you can walk south along the seashore, next to the Park Hotel, to the Punta Corrente forest park. It was created in 1890 r. thanks to Baron Hutterodt – Austrian admiral, who owned a villa on the island of Crveni Otok (The Red Island). Here you can swim among the rocks or just sit and enjoy the beautiful view of the coastal islands.

Cruise ships take tourists on a half-day trip, scenic cruises on Crveni Otok (3 $) or to the Lim channel (12 $), with an hour's stay in these places. There is also a ferry to Crveni Otok, which departs every hour (1,50 $ round-trip). There are ruins of a Benedictine monastery from the 6th century on the island., transformed into a hotel complex during the communist period. There are also ferries to the nearby island of Katarina from the same place (1,50 $ round-trip, ships only sail from May to mid-October). W XIX w. the island was purchased from Archduke Charles Habsburg by a Pole, Ignacy Korwin-Milewski, and he took care of its afforestation. Today the island is an oasis of greenery and peace, unless the ship brings a crowd of tourists.

Annual events include the Rovinj-Pesari regatta (early 5th), a series of summer concerts (VII and VIII), fairs in Rovinj (VIII) and the Sailing Competition for the ACI Cup (IX).

Camping The Porton Biondi campsite is the closest to the center (tel.813557), on a forest-covered hill, 2 km north of the old town.

You can also stay at the nudist campsite at FKK Monsena Camping (tel.813044), located 3 Ian further north and open from May to September. The holiday homes in Monsena cost money 35 i 56 $ for one- and a double house from the middle of the. VII of VIII, a 25% cheaper outside of this period (The price includes breakfast and lunch, if the stay lasts min. 3 days). Both campsites have buses that leave from outside the reception at Camp Monsena.

Many offices in Rovinj offer private rooms for prices from 10 $ per person, plus 30% more when staying shorter than 4 days. Because Pula and Porec are close to Rovinj and have good connections with it, it is worth staying longer in Rovinj, treating this city as a starting point. You can ask for rooms at agencies: Lokva (tel.813365), street Via Carducci 4, opposite the bus station, Kvarner Express (tel.811155), in the marina near the bus station, and also in General turist (tel.811402) i Kompas (tel.813211) – both offices are centrally located, at the Marśal Tito Way. If you hear, that the cheaper rooms are fully booked, go to another agency.

The cheapest hotel is the owner 192 rooms hotel Monte Mulin (tel.811512), situated on a forested hill, overlooking the bay and the park right behind the hotel. The hotel is approx. 15 a minute's walk south of the bus station and is only open from V to X. Accommodation costs money 30 $ i 58 $ for one room- and a double room with breakfast (20% less in spring and autumn).

For all overnight bills (at the campsite, in private rooms and hotels) is added 1,50 $ “Residence tax” per day per person.

Many restaurants in Rovinj are geared solely towards tourists, so maybe it's worth considering supporting local grocery store owners. A great supermarket is right next to the Adriatic Hotel. Several kiosks selling burek stand next to the vegetable market, and the adjoining park and waterfront are excellent picnic spots.

There are discos in a huge complex called Zabavni, cabarets, there are also some restaurants.

Almost every evening there are film screenings at the Gandusio Theater on Trgu Valdibora. The most crowded disco is Kotlić at Stjepan Radić on the outskirts of the city, on the road to Villas Rubin.

From April to September, Marconi fast ferries operate between Rovinj and Trieste 6 times a week (3 at, 19 $). Tickets can be purchased from Eurostar Travel at the marina, and also at the Harbor Master's Office on the other side of the same building.

Local buses run every 2 at. from the bus station north to Monsena and south to Villas Rubin.