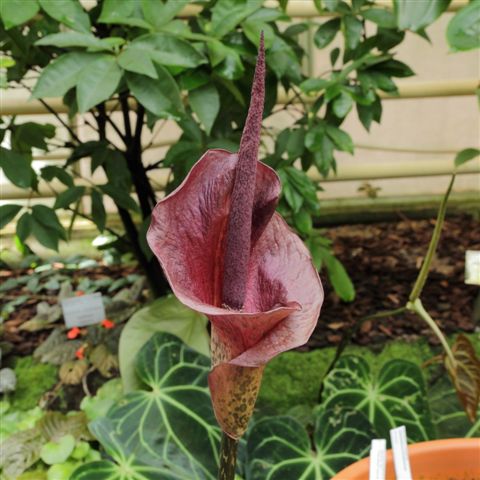 Dear Reader, warmly welcome! The Japanese like to face new culinary challenges and convince themselves, that they would manage to eat the dish, which, like this - konnyaku with nothing special, just such a tasting whim, which, like eating fugu fish, can end tragically.

It is a thermophilic plant that is difficult to eat.

Travel blog reports, that konnyaku, also called voodoo lily, is an Asian plant that the Japanese tried to face and prepared jelly from it. It is not known whether from the very beginning this was the assumption of food producers that it would have an intensely condensed texture, whether such an unplanned effect was achieved when trying to prepare it. However, the dish came out, whose problematic swallowing is a real challenge for the eater! Similar emotions accompany the consumption of fugu fish.

This condensed jelly is not recommended for children and the elderly!

Konnyaku, due to its condensed form, is not recommended for children and the elderly who have missing teeth because it must be chewed thoroughly., otherwise it is a real danger to health and life, resulting in choking! Then only a quick help consisting in a pat on the back or making a grab at the level of the diaphragm can save a suffocating person from a sudden change of "time spheres". I think, that such a daredevil will not dare to take a similar tasting step for the second time.

A nation that likes a challenge and plays with fate.

The European Union has expressly banned the production of konnyak products. However, the Japanese are threatened by eating both konnyaku and fugu fish, not scary, because they like risk! From the earliest times, this nation was accustomed to death, for example, kamikaze flyers, who committed ritual suicide, or others for whom death was an act of honor. Japan is often hit by earthquakes due to its mobile tectonic location, and the little ones, they happen even every day when they are hardly perceptible! The inhabitants are also prepared for the big ones with great power, because they systematically do the exercises, learning which will help them evacuate faster and overcome difficulties.

Dear and Dear Reader, thank you very much for your valuable attention. Each country and its inhabitants are unique, he has his own way of looking at the world, own methods of dealing with problems, and some of them, well, are at their own request.

Konjac plant, whose tubers are used to make flour

Commentary to the attached photo.
The photo shows Amorhophallus konjac- an Asian plant, whose tubers are used to make flour to make pasta or jelly that is so difficult to eat.
CategoryJapan Travel blog
Tagsdishes and dishes of the world Japan