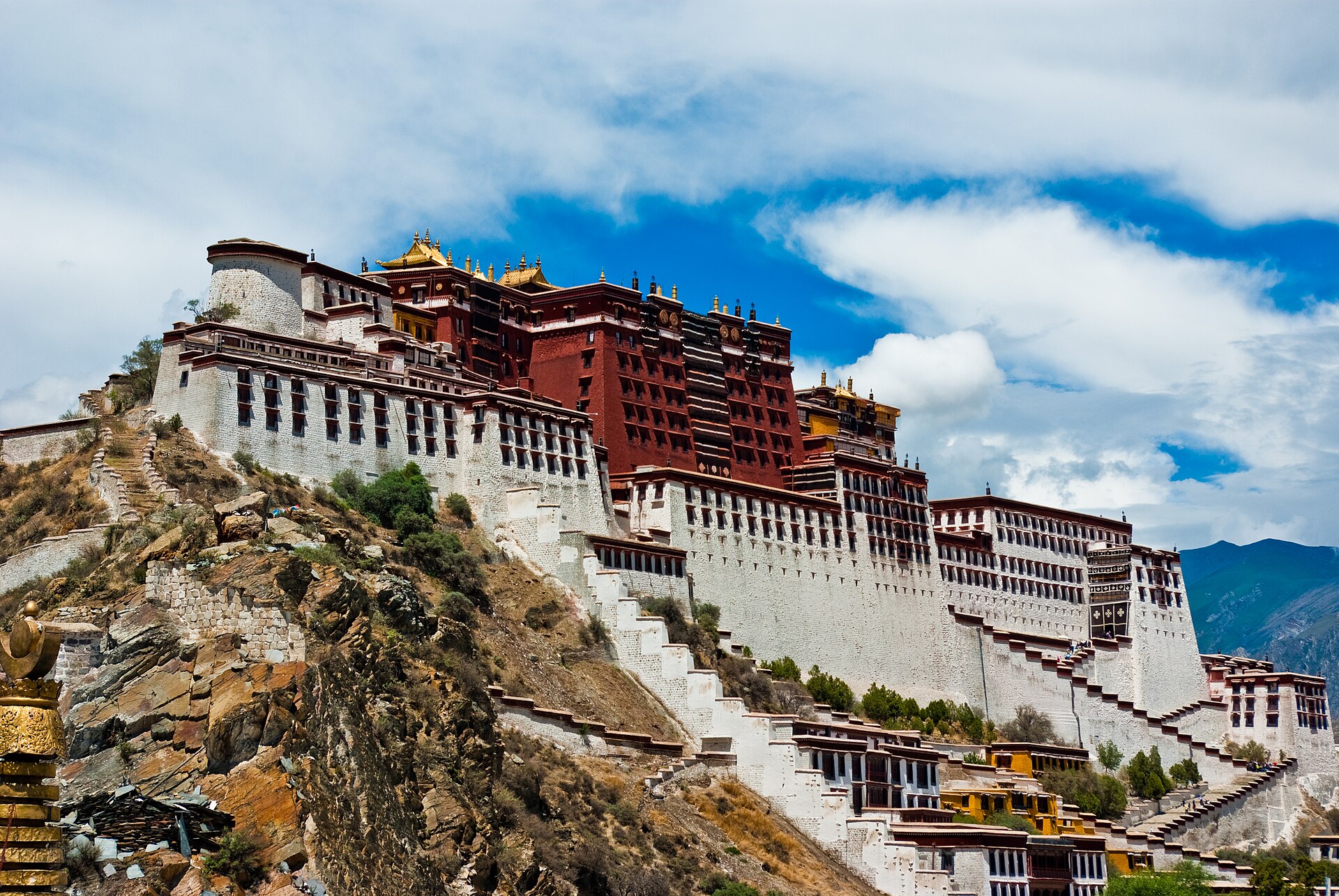 Dear reader, welcome! Today we are going to Tibet with a travel blog, and the goal of our journey will be to get to know the famous building, which is the Potala Palace. There are many such places in the world, which distinguish a given place on earth, for example, the Taj Mahal Palace, known in Agra, India. So let's go!

The travel blog got information, that in the past, the Potala Palace was the tallest structure the world has ever known, and the place where it was built was the peak of Marpo Ri, that is, the Red Hill. He built it in the 17th century, V Dalai Lama and since then he has served the Tibetan government. Along with thirteen floors and a thousand chambers and height 300 meters, the building has the shape of a trapezoid, tapering at the top, which is designed to protect against an earthquake, and it definitely stands out from the Tibetan landscape.

White and red for other purposes intended.

In the Potala Palace, the red part and the white part are distinguished. The Red Sector was exclusively for religious practitioners to study Buddhist scriptures, contemplating and saying prayers in temple buildings. In contrast, in the white sector were the personal rooms of the Dalai Lama, rooms for offices, printing house, offices, theological seminary and library rooms. So we see, as everything was carefully thought out, fixed and subtly refined, anyway, similar to the construction of the Taj Mahal Palace.

The Dalai Lama is waiting from afar to return to his country..

When writing about Tibet, one cannot fail to mention its great and devoted leader - the XIV Dalai Lama., which 30 brand 1959 year due to an unsuccessful uprising against the Chinese troops occupying the country, ratując swe życie musiał z bólem serca opuścić swój kraj. He had then 24 years and decided, that if he managed to survive, in exile she will strongly support her homeland, tell about his fate and work with heartfelt thoughts about it. The Dalai Lama on foot first, and then, weakened by disease on the back of a compliant donkey, he wandered for thirteen days through the mountains until he reached India with hope, that the government there would give him refuge. He was not disappointed and since then his second home is the city of Dharamsala located in the northwest corner of India. I sincerely wish that the country's political situation will enable him to return safely to his Tibetan people!

In the Potala Palace, the buttery scent is captivating..

In the red building of the Potala Palace there is a huge monastery decorated with statues of Buddha and gods, as well as bowls with melted yak butter and lit lamps. Every pilgrim visiting the temple remembers to bring butter with him, which, as a sign of respect for the gods, he places in bowls lit with warm flames of light. The buttery scent envelops the entire monastic complex and blends strongly into the life of the Tibetan people.

In today's travel corner of perfumes we will get to know ...

A narcissus growing in the countries of Asia, which often adorns perfumes with its sweet-spicy scent. Pepper fruit oil also gives perfumes sharpness and sharpens their depth and freshness of aroma.

Dear Reader, thank you very much for today's meeting! I'm glad, that I could take you to these interesting historical places, and undoubtedly they are the Potala Palace as well as the Taj Mahal Palace, which is worth knowing.