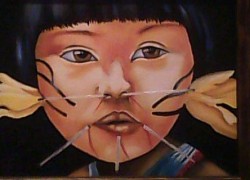 Dear Readers, blog podróżniczy tym razem zabiera Was do Ameryki Południowej, byście mogli bliżej poznać życie i zwyczaje społeczności dzikich plemion, Indian Yonomami. I hope it will be an unforgettable and interesting adventure. The Yonomami people live on the border between Brazil and Venezuela. On the northern side of the mountains of Brazil live them 10-11 thousands and on the south side the mountain range inhabits 12 – 15 thousand. Plemię to do niedawna było completely cut off from civilization i żyło w nieświadomości o istnieniu innych narodowości.

Arrival of the white man

The moment the white man arrives and meets him, Indians' lives changed completely. The missions of the Salesian Fathers began to emerge, thanks to which the Indians got the chance to learn Spanish, possibility of general education as well as getting a job. The white man taught them how to build pirogues thanks to which they could move freely and fish. However, not always these contacts brought only positive benefits, because these meetings over time took the form of threats of numerous diseases which turned out to be disastrous for the Indians.

Why did whites contaminate the water with mercury

Also, the white man who came to these areas did not always have clean and honest intentions, his willingness to profit and get rich quickly in gold and uranium deposits located there caused actions that were dangerous to the health of the natives. Wyobraźcie sobie Drodzy Czytelnicy że by zdobyć te cenne kruszce a następnie oddzielić je od piasku he contaminated the water with mercury która po dostaniu się najpierw do organizmów ryb a potem ludzi powodowała uszkodzenie mięśni i narządów wewnętrznych! In fact, it's just 10% Indian communities lived near water sources. They were afraid of mosquitoes who liked water reservoirs and were responsible for many serious diseases such as e.g.: oncocercosis, malaria or the dangerous Dengue hemorrhagic fever. Other equally serious diseases include: amoebic and hazelnut dysentery, typhus, jaundice or tuberculosis.

The travel blog also discovered that there was a danger in the water, and that was from the side: electric pike, piranii, anacondas or vipers. Among them, it raises a considerable threat, the seemingly innocent catfish called- kandera który niepostrzeżenie podczas kąpieli nie zauważony wpływa do dróg moczowych człowieka lub zwierzęcia, which is very dangerous.

What was the ash from burnt ants for?

The travel blog also noted that the Yonomami Indians can cope well in a forest that provides them with all the most necessary and valuable materials for building houses and clothes, food and medicine. Na przykład w momencie ukąszenia przez żmiję w celu złagodzenia dolegliwości stosują z powodzeniem ash from burnt ants czy wyciśnięty sok z liści tytoniu. When their head hurts, it is then that the river silt brings relief.

Yonomami Indians call themselves "people of the jaguar”, who is their guardian and to look like him they stick thin contoured sticks to the beard (on both sides and in the middle) and pierce their nostrils. When a white man manages to meet Indians, it is always a sign of respect and acceptance that they need to be given things that can help them in everyday life.. Belong to them: fishing rods, hooks, red material( nota bene is their favorite color ) from which are sewn loincloths called- guayaco as well as sugar, salt, mirrors and combs.

The introspection of the travel blog was quite meticulous and he found that the Indians paint their bodies and decorate them with various patterns thanks to special natural means, and then they feel as if they are clothed. So they use dyes derived from the arnoti tree. Its fruits resemble chestnuts and their decoction, after adding palm oil, forms a viscous substance that covers the body. Kasztany nazywają się uruku a barwnik to onoto.

During pregnancy, women cannot paint and are looked after by the entire village. During this time, they cannot eat or drink from earthenware, eat an armadillo or an anteater, because there is a saying that the child will be born sick or disabled. After giving birth, the placenta is buried in the ant mound. When a boy is born, the mother always wears it on her right hip and breastfeeding, and when the baby is born, she is worn on her left hip and breastfed.

Yonomami Indians live in one huge hut with a diameter 50 metrów zwanej – sabon. Inside, there are a dozen or so shacks- tapiri which are equipped with a hearth and hammocks and are inhabited by individual families. At the bottom there are hammocks for adults and those at the top are intended for children. Dach szabono pokrywa się liśćmi bananowca zwanymi – miyoma lub ketiba.

The Indians live at the highest level in one place 2 – 3 years and then, in search of food, they move to other areas where they have already planted: bananas, manioc, corn. They are also forced to move by the poor condition of the szabono roof, in which insects anchor over time.

The areas where the Yonomami Indians live are increasingly penetrated by white people. Until recently, these were virgin peoples, and now their areas of freedom of life are shrinking dramatically. They are distrustful of us and have abducted a white man over the years. Swój los właśnie uprowadzonej dziewczynki opisała będąc już dorosłą kobietą pani Helena Valero. Była ona córką Brazylijki i Hiszpana a spędziła po porwaniu kilkadziesiąt lat wśród Indian. She got married and had two children, and at a convenient moment after her husband's death, she and her children escaped from the Yonomami and hid in Brazil on the El Platanal Plateau. Unfortunately, she was unable to find herself in the new life, she had problems finding work and schools for children. After some time she moved back and lived close to the Indians again.

Never call me by name

Indianie Yonomami między sobą do not use their first name, lest the evil spirits bring misfortune upon them. In relation to the European, they only mention Spanish names. Only after their death, their relatives find out what their name was. Czyni się wyjątek tylko do dzieci które woła się po imieniu.

What is tonka bean for

The travel blog ends today's story with a nice and pleasant touch, because in Brazil tonka bean grows and its fruits give a warm and sweet fragrance used in the perfume industry. The same is true of the vetiver grass root, whose spicy aroma gives the perfume a resinous and powdery accent.