Thin from Krakow to Dakar 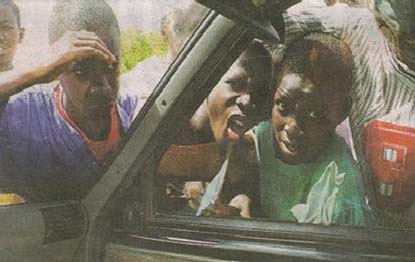 22130 km w 48 days have passed cinquecento. Krakow crew: Jolanta Czupik and Dominik Stokłosa have already made many trips with this car. They just got back from Dakar.

Jolanta Czupik and Dominik Stokłosa, AGH UST graduates, every day residents in Krakow. From 2003 roku zwiedzają Świat w cinquecento 900. They have already been to Ukraine, in England. Russia, Kazakhstan. Pakistan, Iran. Kashmir and in the ruins of castles in Slovakia. They announce further expeditions, but they do not yet reveal their purpose. Cinquecento that he has today 12 years and 341 thousand. km mileage, there has been an engine overhaul so far, and during the trip Krakow – Dakar burned down 1317 liters of fuel. You can read about previous expeditions on the website.

Czech Republic, Germany, France, Spain and the Strait of Gibraltar passed very quickly. Africa has become a real challenge, which is only separated from Europe 40 minutes spent on the ferry. The team of travelers, despite the sand and heat, made it through Morocco, Western Sahara. Mauritania. Mali i senegalski Dakar. arriving happily back to Krakow.

Five hundred, affectionately called "Thin”, turned out to be a very good means of transport on African roads. The rear seat cushion has been removed, to fit in the car 30 liters of fuel, food supplies, gas cylinders, drinking water, Clothes, two spare wheels, packages with food and 15 liters of washing water, as well as radiator watering, after fan failure, which has already broken down in Mauritania. Next part, which failed, is the bracket for the left engine mount, that is, one of the engine mounts, that have been successfully welded.

– The vibration-leveling sleeve in the rear swingarm also broke – Jola recites in one exhalation, wondering, that you may not know this part of the car, The placenta whistled, but only in Poland, so it took Africa unscathed. The most stressful failure was catching a slipper two days in a row, because although foresight travelers took two spare wheels, they rode with the soul on the shoulder forcibly making up 600 km road to the nearest service in Bamako, the capital of Mali.

Morocco, which is what God will give

This country is a paradise for tourists, who because of the policy of the new king under the slogan “10 million tourists a year” they are treated like deities. The inhabitants, very friendly attitude, of course they want to earn money for visitors, but they do it in a nice way. The only factor weakening the love for Morocco and Casablanca is “inszallach”. The local "what God will give" can be heard in many situations. The consul used them with pleasure, thanks to which the travelers spent in Casablanca 8 extra days pending visas to Mauritania. A city known from the movie, three million zlotys today, soared high skyscrapers, but his visa habits remained similar.

During the extended stay, "Cienki" took travelers to the Middle and Low Atlas, where the heart sliced ​​at the sight of twelve-year-old girls wearing size shoes 43, from the babies grazing goats, Jola gave the children all the sweets, what they took to raise their sugar and energy levels, as well as clothes, leaving myself only a few T-shirts and three pairs of pants.

With a successfully obtained visa to Mauritania, they set off for Chinguetti, that is, the First Gateway to the Desert, behind which everything looks like in the most common ideas of a European about the Sahara taken from postcards: dunes, sand. oases and camels.

A shovel was very useful here. Especially when the eyes, curious about a beautiful view, wanted to follow the wheels of “Thin” towards a picturesquely situated dune. This ended up pushing the car for two hours in the ankle-high sand for the stretch 170 meters back to the main road. The road, of course, meant only the harder part of the desert, marked only by the traces of cars, which once in a while was irretrievably damaged by the wind.

– Some are surprised, why we take food to Africa and they accuse us of being greedy – says Jola – but they know nothing, which is served below the Western Sahara. Because 80 one percent of Mauritania's area is covered by desert, the only meat eaten there are chickens and goats. Everything, of course, excessively bony and cooked without salt.