Aborigines - why were they perceived as "subhumans" ... 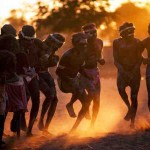 Learn about the sad history of the Aborigines. Why Aborigines have lived in Australia for over 40.000 years and until the end of the twentieth century they were perceived as subhumans and the authorities did not include them in censuses!

Hello, my dear readers, and I cordially invite you to another unforgettable journey! As you probably remember, I recently told you how the Yonomami Indians live, and today's travel blog will take us all the way to Australia, to meet the Aboriginal people!

How did the first Aborigines come to the fifth continent?- Australia.

From what the travel blog has learned, Australia's first settlers did not get there by land, because this continent has always been an island. So they came there by sea, most likely from Indonesian Timor. According to scientists from prehistory, they got to the Australian continent by accident. Namely, when a tight group on a large raft or a flotilla of small rafts, they traveled on rough seas, they were suddenly washed ashore in Australia, where they founded a settlement.

Which made them survive in such an extremely difficult environment?

Thanks to their extraordinary psychophysical predispositions, they managed to survive and live in such extreme environmental conditions, oscillating in the range of the wettest tropical forest, all the way to an extremely desiccated desert. It turns out that no people on earth have managed to survive so successfully in such a difficult environment, and for such a long time!

Over time, they felt more confident, they created their own language family, culture, art, myths and beliefs considered the oldest in the world. Currently, the aboriginal population constitutes approx 1,5% Australian population and mostly rural areas.

Why Aborigines were ignored and not respected by Europeans?

Unfortunately, only a small group of Europeans showed a human approach to the indigenous people. Watkin Tench and James Cook serve as a positive example, who treated them kindly and respected them as they are. It is sad, but for the others they were an obstacle and they saw in them natural threat, as naturalist Tim Flannery wrote about it.

Recz is also determined by the fact that until the end of the 20th century they were perceived as subhumans, to this level, that federal authorities did not include them in population censuses! For this reason, it was not really known how many Aborigines lived in Australia at the time of British settlement.. Thanks to blog travel, we know that at the end of the 20th century, indigenous people were from 50-60 thousand. Their population was decimated by numerous diseases that Europeans brought with them: ospa, pleurisy, syphilis, Chickenpox, to which the Aborigines were hardly immune.

For what purpose Aboriginal families were drastically separated?

Traveling back in time to years 1910-1970, we learn about the tragic separation with consequences for the Aboriginal families, and this is due to the introduced government program. His goal was to get Aboriginal children out of poverty with the help of the physical separation from both family and society.

The terrified ones, the sad and deprived children were sent to foster families or state centers where they stayed until 16, 17 age. This is a dramatic move, was considered progressive at the time and was intended to prepare children and provide them with a better life among white people.

And so until the 1960s with legal permission in more Australian states, the state, not the parents, cared for the children! They could come without a word of excuse or apology, and against understandable resistance, take the children! It was probably an unimaginable drama for entire Aboriginal families.

The state later tried to repair all moral harm, spiritual and social and returned great land and the rock of Uluru to the wild Aboriginal tribes. Schools and hospitals were also funded more. However, the most important thing is that they should be treated like people, fully respectful and make them feel at home.

So let's take a look at today's travel corner of the perfume, because here you will learn that traveling to Australia can also bring positive benefits for beauty. The country is known for its eucalyptus trees, from which leaves and twigs the essential oil is obtained. It is used in the food industry, pharmaceutical and perfumery. Amber is also known( ambergis) obtained from the digestive tract of sperm whales ( kind of cetaceans), where it is expelled. In the production of perfumes it is used as a fixative. There is also a tree growing from Australia- white sandalwood ( Santalum album) which produces the oil, and both it and its distillate are an essential ingredient in the fragrance industry.

I would like to thank my Dear Readers for their attention and open-heartedness, and see you in the next travel blog. Stay with us.

The photos show Aboriginal dancing. These indigenous peoples have been to Australia for over 40.000 years! With the arrival of white people here, their sense of security, health, peace and their proper way of life have been severely damaged.